Life isn’t a matter of milestones, but of moments.

February 4th 2006. I’m 15. Football and NUFC mean more to me than anything else. It’s all I talk about amongst friends, it’s what I do after school each day and it’s what makes weekends worth waking up to. Why? Because I live in Newcastle and unlike most places, all I care about and all anyone cares about is NUFC.

To provide you with some context, this day in particular was Glenn Roeder’s first game as Newcastle’s Caretaker Manager. Going in to the game we were hovering precariously above the relegation zone, having taken just 1 point from the past 18 available. Souness had just been sacked, despite having been given £50 million to spend just 6 months prior. Up until this point in my life as a toon fan I’d only ever known us challenging at the top end of the table and fighting hard in the cups, domestically and abroad I might add. Bobby hadn’t been gone too long and everyone still talked about the Keegan days. But now, things were different.

I was sat in my seat in the Gallowgate, shivering next to my dad, feeling nervous about our game with Portsmouth. Pompey were, as they like to say, playing up and showing good league form under Harry Redknapp. The atmosphere at the game was tense. Nobody really thought Roeder offered much, despite his ‘nice guy’ persona.  We’d been absolutely awful all season and we had so many first team players injured, most notably of course our record signing Mr Michael ‘glass legs’ Owen.

The first half an hour was as nervous as I’d ever seen Newcastle. Despite Roeder’s touchline presence, Souness football prevailed. In other words, it seemed nobody in a black and white shirt actually wanted the ball. Then, around 30/35 minutes in to the game something happened which provided more entertainment than the season’s previous 23 games put together. A very well dressed lady a few rows down from us, a stand out poshy amongst us, was literally whacked in the back of the head by a mince pie. A hot, messy missile of disastrous proportions, it must have been launched from about fifty rows up! It exploded on the back of her bonce and sent a good section of the Gallowgate off in hoots. ‘That’s the best shot you’ll see all afternoon son’, remarked my dad in true dad fashion.

Anyway, as soon as the laughter seemed to subside a scrawny looking Charles N’Zogbia managed to send the whole stadium in to raptures when he scored just before half time. A precious goal to give us all a much needed cheer. However, in comparison to what we would witness in the second half, this was nothing.

Uncharacteristically fluffing a close range effort in the FA Cup, away to Cheltenham, the week prior, Alan Shearer missed the chance to make history and surpass the great Jackie Milburn’s all time goal record for Newcastle. Shearer, who had seriously contemplated retirement after last season, gave Newcastle one final year and we were all dying to see if he could break the record. In the ‘64th minute our hometown hero did just that. Shola Ameobi stylishly flicked a long ball through the legs of a defender, setting Shearer up to run on to the ball and fire past a helpless David James. Euphoria.

To this day I’ve never known anything like it. And I mean anywhere, not just at St. James’. It seemed as though all unlikelihoods of the universe had somehow managed to cross paths within seconds of each other. First of all Shola providing such an assist, when he’s spent half of his Toon career using his second touch as a slide in tackle, and then the image of Shearer scoring such a meaningful goal in true striker fashion. Had I actually witnessed this? It wasn’t a sitter by any means. Shearer had to work for it. He wanted it. He gave his all to run past the defender when his running days were a far cry gone.

As my grandad and my dad were always keen to remind me, this wasn’t the true Alan Shearer, this was the old, end of career Shearer with legs long gone. However, in that moment it really was the Shearer of old. How befitting to break the record with a true striker’s goal rather than an ugly tap in or penalty. Especially after missing that sitter the week before, it was as though it was meant to be.

Scoring in front of his beloved Gallowgate, celebrating with the iconic hand in the air and look of delight, it was magic. This was what football meant. And I was standing there, clinging on to my dad, witnessing history in the making. Life isn’t a matter of milestones, but of moments. This was my moment as a Newcastle fan that I’d go home to tell my grandad about in every fine detail and the moment that I’ll tell my children and grandchildren – I was there. 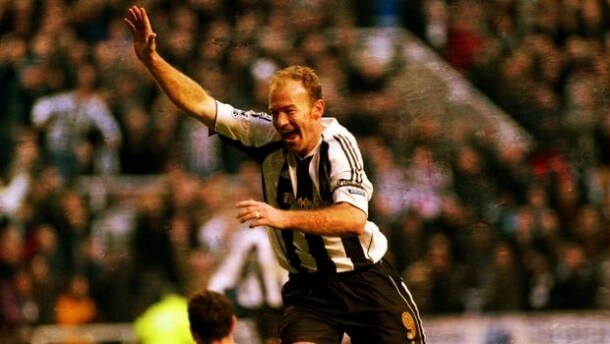 Beneath the money, the ego’s and all things that come with being a modern day footballer, a player’s career begins with a passion for kicking a football soon after they learn to walk. Our hero, a man who was one of our own, scored a goal it seemed he was destined to score since kicking his first ball against a wall in the part of Newcastle where we both grew up.

A lot of fans are used to seeing their teams win trophies, Newcastle fans don’t have that luxury. You have to go back to 1969 for that! What we seem to do instead is champion certain players. A culture has developed. We love our strikers, our flair players, those lovable gems who entertain us. So when one of the greatest English strikers of all time, the Premier League’s all-time highest goal scorer, creates history in front of your eyes, you feel on top of the world.

When the ball hit the back of the net that day it provided a catalyst for the rest of our season. Newcastle, unimaginably before the game, went on to win 9 of their last 14 games and qualified for Europe in the process. Shearer would go on to score his final goal for Newcastle against Sunderland.

What a send off. You couldn’t write it. A mystical presence descended on Tyneside and gave us something to believe in. Nobody can ever take that away. At present Newcastle are in limbo, simply existing under the Ashley regime in an ambitionless nightmare. However there are moments that define us, that bring us together and that remind us what it is truly like to be part of Newcastle United. To this day my dad and I still laugh about the posh, mince pie soaked woman waving her wig in the air and celebrating Shearer just like the rest of us. You only get to experience unbridled joy and unity like that in the constructs of watching the team you love. Eight years ago I witnessed my greatest footballing moment, a moment so beautiful that it’s easy to understand why we call it the ‘beautiful game’.

After Shearer scored and play resumed that day, I couldn’t hear myself think. I was simply a young boy in love with what I’d seen, joining in a chorus of 52,000 fanatical Geordies singing ‘Walking in a Shearer Wonderland’. We don’t have much to celebrate here at Newcastle United but for a club with such a culture that only those inside seem to understand, that moment was our Nirvana. Things just made sense. Life isn’t a matter of milestones, but of moments. That was my greatest moment in football. 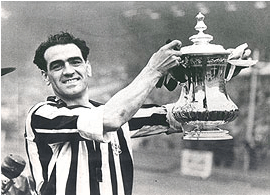